Drawn early to color and art, she put it aside for 20 years
before seeing where she belonged 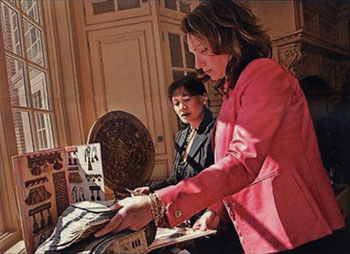 From the time she was very young, Linda Woodard liked to create things.

“When I was a little girl, I loved to sketch, to draw, to paint,” Woodard recalled. But as she got older and ready to pursue a career, she put away her childhood dreams.

These principles, learned from her father, a lifetime GTE maintenance man, and her mother, a longtime administrator for American Airlines, formed the core of Woodard’s work ethic. She was so career-focused that by the time she graduated high school, she had already decided she would study marketing in college.

The transition on the other end of college was equally scripted. She graduated from North Adams State College (since renamed the Massachusetts College of Liberal Arts) on a Sunday and started her first full-time job the following Tuesday. It was as a sales administrator at start-up Viewlogic Systems, a “fast-paced” software firm started by former Digital Equipment Corp. employees.

“It was fantastic, and I was exposed to a lot,” she said.

Within six months she moved into marketing. But to her surprise, Woodard found it less interesting than sales. She missed the direct contact with people.

After three years she pursued another sales opportunity as an account manager with an even smaller start-up, Lasertone, where she flourished. In 10 years with the firm, Woodard worked her way up to director of sales and helped build the company from 4 to 60 employees, with more than $5 million in annual revenue.

Throughout this period, Woodard felt something missing. “The creative side was lacking,” she recalled.

After Lasertone, Woodard took a six-month break. When a friend gave her a copy of the book “Drawing on the Right Side of the Brain,” her childhood artistic promptings came back to her. She signed up for a studio art course at Assabet After Dark, an evening program for adult learners at the Assabet Valley Center for Continuing Education in her hometown of Marlborough.

But while she relished the reconnection to her creative side, and despite her husband’s healthy earnings, Woodard knew she wanted to maintain her income. She also felt it was time to “stamp my big company card.”

In December 2000, she took a position as an account manager for Iona Technologies, a global consulting firm specializing in software integration. Woodard’s territory was New York City. Her clients were large financial services firms, many headquartered in the World Trade Center towers.

When 9/11 hit, Woodard was “totally paralyzed. For two-three weeks, I sat at my desk with no one to call.” With her clients and territory severely diminished, Woodard moved on, taking a position as an account executive with another tech start-up, but that position, too, was short-lived as the firm proved financially unsound.

For the first time, Woodard began to think seriously about getting out of high tech.

“I had been in several different companies in 14 years and had still not found happiness or satisfaction in my work,” she recalled. “Having changed jobs so many times, I knew I was not exploring some aspect of myself.”

Friends encouraged her to pursue her artistic bent. Two of them were interior decorators, and Woodard recalled thinking: “Hmmm, maybe that’s something I should consider.”

She re-enrolled at Assabet After Dark, this time in a basic decorating course. “I was like a kid in a candy shop,” Woodard said.

But the ingrained work-ethic voice in her head kept asking: “Is it serious enough? Could it really be a viable career?”

Ever methodical, Woodard designed a plan. She enrolled in an evening program at Mass Bay Community College to pursue a Certificate in Interior Design. Meanwhile, she kept a foot in her old life, returning to the world of high tech in a sales position.

It took her more than two years, but in the fall of 2004, Woodard obtained her coveted certificate. During the summer, she had assiduously combed through, cut out, and collected help wanted ads from the paper, saving them in a folder she kept on the island in her kitchen, stopping frequently to pore over them.

One in particular caught her eye. It was a firm seeking someone with sales experience first, design experience second. Two interviews later, Woodard was hired as a design manager at Taunton-based Claudette’s Decors. After eight weeks of training with Claudette’s owner, a 20-year veteran of the design business, Woodard was sent out on her own.

“All of my skills transitioned in beautifully,” she said of her new role, consulting with clients in their homes on custom window treatments. Now, she has no doubt she made the right move.

“What I’ve been searching for, I finally found. And I’m working harder than I ever have but enjoying it more,” she said. While it does not yet match the peak of her high-tech sales days, Woodard’s current income, strictly commission-based, is back in the $60,000-80,000 a year range she had in her last tech job.

She also said she is “unexpectedly happy in two ways.” One is the flexibility of her schedules; she often meets clients at nights and weekends.

“When I was 9-to-5 in a cubicle, weekends were valuable,” Woodard said. Now she builds her schedule around her clients’ needs, which is the second unexpected delight: “I build real relationships with my clients,” Woodard says. “Sometimes they get so excited I can bring their visions to reality that I get a hug after a three-hour meeting, and that is the most emotionally satisfying thing.”

Sign up for our newsletter and receive 10% off on your first order!